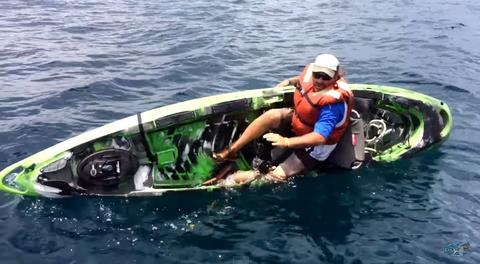 How to get over the fear of flipping out of your kayak, canoe, or stand-up paddleboard.

“A voyage is like a shipwreck, and those whose boat has never sunk will never know anything about the sea.”

Perhaps the question I have most often heard from paddling newbies is “How stable is this boat?” Whether they are first time paddlers on a guided trip or purchasing their first kayak, canoe or sup, it seems stability is always a high priority for the uninitiated. So much so that many dealers and guides will tempt inexperienced paddlers with claims of “unflippable” kayaks. But while some paddle craft are more stable than others, there has never been a boat that is “unflippable”. Firstly because that’s not even a real word according to spell check. And then there is this thing called human error which will find a way to take even the most stable boat and turn you over and out of it faster than you can say “Eskimo Roll”.

If you like paddling then you will go paddling a lot. And if you go paddling a lot, you ARE going to fall out of your boat eventually. It happens. I myself have been paddling for almost 20 years, and not counting whitewater, I’ve probably unintentionally fallen out of my kayak ten times. Okay, maybe eleven.

Probably the one that stands out in my mind the most was the Wacissa Laundry Day incident. Once I was wearing a pair of really dirty shorts when I took a day paddle to the springs on the upper Wacissa. Dirty shorts in the sense that looking at them I thought these shorts would need at least two power washes in industrial grade chemicals, paint stripper and bleach in order for them to be anywhere near close to clean again. But after swimming all afternoon in the pure water of Big Blue Spring, I noticed that the shorts not only came clean but looked almost brand new! On my next trip to the upper Wacissa with a friend, I decided to bring along a big mesh bag of laundry that I intended to tow around the river behind my kayak. The mesh bag didn’t create much drag going downriver and I was quite smug with how well this was working out. That is until paddling up the run to Big Blue spring where the current on the run started creating too much drag. Way too much. So my solution was to pull the mesh bag back on board into the empty cargo hold of my nice, stable fishing kayak. But the bag of course didn’t want to cooperate, and after a hernia inducing heave… sploosh… into the water I went. See how these things can happen?

Another great “losing it” moment occurred during a paddling trip with a friend of mine who was in his new, “unflappable” sit-on-top diving kayak. A kayak so stable it was designed so that a paddler can suit up and scuba dive off it. Not five minutes into our trip, he asked for bug spray and flipped out trying to reach for it after another paddler tossed him a can. See how these things can happen?

Yet another memorable surprise river baptism came on a guided trip to Goose Pasture. Powerful, unexpected winds were blowing a steady 30 mph upriver, with gusts up to 50 mph. I paddled up to a young woman on the trip that looked to be having difficulty paddling into the wind and who as it happened was on her first kayaking trip ever. The wind was gusting so bad the Wacissa was white-capping and she asked me if later on we would be paddling downriver. I told her we were already. Then a big gust of wind hit and into the river she went. Momentarily freaked out, she didn’t panic, and reached for her kayak and not the handful of things that fell off with her into the river (hat, sunglasses, bottled water). See how these things can happen?

The moral of these stories (besides that it’s a dumb idea to do laundry via kayaking a spring fed river) is to get over the fear of flipping out of your kayak, canoe or sup. Like a good scout, be prepared for the worst. Keep anything you don’t want to lose tethered to you or your boat or otherwise securely stored, and the only thing lost will be a bit of pride. Go ahead and fall in on purpose to see what it’s like. Know how to reenter your kayak in deep water and understand the motions so when it does happen accidentally, you’ll know how to respond. Don’t worry about falling in. These things happen.