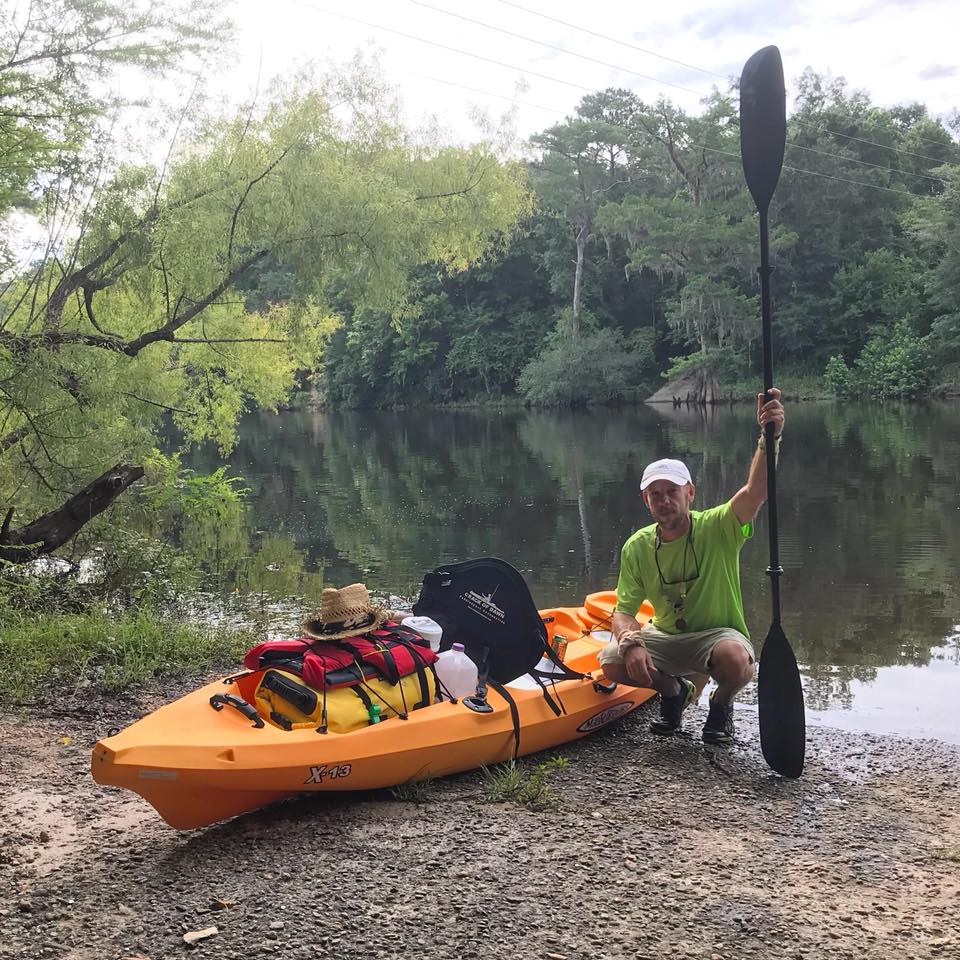 There are many treasures awaiting the brave and eccentric few who find reasons to go out and explore.

When circumstances permit I enjoy taking extended kayaking trips into the waterways and wilderness. These solo trips are my vacation days, as I readapt from civilized life to the needs of the day spent in primitive wilds detached from the hustle, bustle and anxiety of modern spaces. Looking for a trip that would keep me “out there” for 4 days to a week at most, I patiently waited for the Late Spring rains to subside. My plan was to set off the first week of June on a solo paddling adventure beginning just below the Lake Talquin dam off Hwy 20 west of Tallahassee, follow the lower Ochlockonee and Crooked Rivers to Carrabelle’s beaches, and weather permitting, kayak on to a grand finale paddle to Dog Island. Sounds like fun right? No trip holds to plans though, and after hearing my story you’ll have an idea of the hardships such a trip often entails, and the unexpected treasures ready to reward the brave, the eccentric, and the crazy few who find reasons to get out there!

After a long night packing everything on my list and checking it twice, I woke from an anxious (to get started) and light sleep at 7:30 am and made coffee. My ride would be picking up me, my river whip (a sharp mango colored Malibu X-13 kayak courtesy of Harry Smith Outdoors) and camping gear shortly after 8 am. They morning air was still cool, and the sky a light blue broken by intermittent white puffs of cloud. Looked like a great day to do some kayaking! By 9:30 am I was geared up, fully caffeinated and sliding my boat into the water just below the dam at Lake Talquin. After all the planning and anticipation my vacation had finally begun!

Just below the dam the Ochlockonee River was wide and despite the preceding two weeks of rain, the current was gently. According to the gauge at Smith Creek, the water level was at 12.3 feet but slowly dropping. Clouds began to thicken and increase as the morning and the water passed along. Overcast skies helped keep the temperatures from climbing to unbearable highs, and mild winds helped soften the impact of the relentless Florida summer humidity. Anhinga and swallowtail kites were plentiful in the air and perched atop deadfalls at the river’s edges. Gar were abundant. Despite the higher than normal water levels, the upper five to eight miles of the Ochlockonee still had three large sandbars perfect for camping. I wondered if some would be washed out downriver. I’d know soon enough I thought.

As I passed by Rock Landing on the East Banks I encountered a man and woman camping out of a small tent, with a small john boat tied up to a tree along the shore. Aside from these campers on the morning of my first day, I wouldn’t encounter anyone else on the river during my trip.

Further downriver I heard some snorting and commotion on the western bank. A large, black boar (common fauna in the Apalachicola National Forest) was bristling and snorting on a high bluff at the waterside. He didn’t seem to see me, but must have smelled me as I paddled past. I don’t speak wild hog but it seemed aware of and upset by my presence. Quietly paddling past, I broke the morning silence by mischievously hollering “Hey PIG!!!” as I passed it on the bank, spooking the wild hog into a panicked run off into the underbrush of the forest.

The rest of the day I simply paddled downriver, enjoying the sounds of dragonflies zipping past, the lazy flow of the river and the white noise of nature. The lowered decibel levels of the deep wilderness were of such a shocking contrast to the street noise of Tallahassee as to make it seem as if the river was silent. Next thing I knew it was 3 pm and I was passing a carved wooden sign marking the old Langston Ferry crossing. By 5 pm I had reached the Huey P. Arnold landing and camp area. As the river continued to narrow with each passing mile, the current strengthened, and it was hard to go much slower than 3 mph. The sun started to break through the cloud cover around that time, and after another hour I arrived at Pine Creek Landing. Eighteen miles into my vacation I decided I would go ahead and break camp there, as Pine Creek landing had lots of soft green grass and a beautiful view overlooking the river.

Setting up camp was easy. Within a half hour of arriving I had my small dome tent up and a campfire hot enough to boil water for coffee blazing. I enjoyed a hot, fresh Sumatran roast coffee from my Stanley Coffee Press and Chicken Pesto Pasta courtesy of Omeals. Just add liquid, wait five minutes and ta da… a steaming hot and delicious camp meal out of a plastic bag that didn’t taste like it came out of a plastic bag! I spent the rest of the evening listening to cicadas, tree frogs and the occasional splash in the water as a fish would jump. Fireflies lit up the darkness.

After a brilliant night’s sleep I woke to heavily overcast skies and drizzle. Rolling over I unlocked my dry box and turned on my phone. No signal… 6:33 am… I need some coffee… By 7 I had the embers of the previous evening’s campfire going and water boiling for coffee. Breakfast was Maple and Brown Sugar Oatmeal, courtesy of Omeals again. I cannot tell you how awesome these package meals are, especially when it’s early in the morning and you don’t have the energy yet to cook breakfast over the campfire. I didn’t do much else after that but ponder whether or not the rain would get worse and whether or not I should break camp or just hang out and fish some while I waited for the weather to change. I ended up deciding to paddle on, and fishing some as I went. By 10 am I’d packed up my camp, made a “to go” cup of coffee and hit the water again. The rain ended and the skies started to lighten. Within a half hour the skies were clear and the sun was up and Day 2 was officially underway.

I didn’t have much luck fishing, and the narrowing river made casting difficult with all the deadfalls and overhanging tree limbs and willow banks. The forest closed in, squeezing the Ochlockonee to as narrow as ten yards across in some sections as its current quickened accordingly. Navigation was difficult as the water levels opened up sloughs, creeks and backwaters into a multitude of directions. Forks and braids and current exposed choices of which way to go… left, right, straight ahead? Generally I just followed the strongest current, but sometimes even that didn’t seem to work, as the water was flowing strong in many directions. So there was a lot of fingers crossed moments as I paddled my path.

Early in the afternoon I reached Langston Fish Camp, and only an hour later I reached Smith Creek Bridge. Checking my paddling guide I saw that Whitehead Landing was near to the bridge, and had drinking water which I could use to refill my supplies. According to the guide, I would need to paddle approximately 2 miles downriver and then look for a slough headed back north to paddle to the landing… I found multiple sloughs that looked to be the right turn I needed, and none were marked, so I just picked one that looked promising and started paddling upriver. As the slough narrowed I came across a four foot alligator hanging out on a small spit of sand and mud. Unlike most alligators this little guy didn’t spook and flee at my approach. He just sat there and watched me paddle past. A quarter mile past and I came back to the river main river again. Having taken the wrong path, I turned around and paddled back down the slough. The alligator was still laid out on the bank, still relaxing. I asked him for directions but he didn’t answer.

Checking the river guide again I decided to try to make for Revell Landing. Again, travel to this campsite required paddling up one of the many back lakes prevalent along the lower Ochlockonee. And again, I picked the wrong turn and spent more energy and time getting lost in the swamp. By 7:30 pm I was unsure of where I was, and with the daylight dwindling I decided to make camp wherever looked good. I’d need some light to gather firewood and set up camp yet. So I ended up pulling over in some seriously dark, thick swamp along a sharp bend in the river. Camp set up was quick. I strung my hammock up and found firewood and got dinner and coffee going just before dark.
‍

During the evening I decided to go frog gigging. The river’s current was flowing strong around the riverbank though, and in the dark it was difficult threading the kayak through the deadfalls, willows and vegetation along the banks in search of them. I returned to shore and hunted for them by foot. I saw a couple but simply missed them with my gigging spear. Entirely focused on the riverbank and frogs and cottonmouths I heard a noise directly behind me. I turned and as my headlamp’s light cut through the dark a massive boar appeared in the light not five yards from me. Using my “soft voice” I said something like “get outta here boar”… The boar just looked up momentarily and went back to rooting around. So I screamed “GET OUTTA HERE BOAR!” and that did the trick. He bolted away. I decided to go wrap myself up in the hammock and call it a night. As I drifted off to sleep I wondered if I should have camped here. Would the boar return? What about bear? What about Colonel Kurtz?